There is a tremendous amount of processing power distributed throughout the world in home computers that have a modern Graphic Processing Unit (GPU) card. These cards typically have dozens to hundreds of separate processors, which can be used to work on highly parallel tasks. Although intended for games and graphic applications, they are also now being successfully utilized as an aid to scientific research, computational biology in this case.

GPUgrid.net is a project that conducts molecular simulations on such a distributed ‘grid’. Anyone with a modern nVIDIA GPU can participate (see the currently supported cards list on the GPUgrid website).

HIV Protease is a viral enzyme that helps in the assembly of HIV virions. Understanding its structure and function is computationally time consuming but crucial in the development of inhibitors to target this protease.

Brain function studies are being aided by the simulation of the molecular dynamics of the D2 Dopamine receptor and associated mobility of sodium ions.

Protein-protein binding affinities are being calculated using the Sarcoma Homology 2 protein domain. This is important in understanding diseases where cell growth and development are impaired.

Various other molecular simulations are underway or planned.

To join the effort, you need only install a ‘client’ on your PC. This client is a small piece of software that usually runs in the background. Participation in this effort by the general public is free, easy to do, and strongly encouraged. Their website has pictures, animations, documentation, etc.

Proteins are the machinery of life. They are responsible for the structure and processes we see in living organisms. They are continually produced within cells, different cell types making different sets of proteins. The genetic code (DNA) stores gene patterns as sequences of base pairs. Genes are expressed (proteins created) when RNA carries these patterns to ribosomes which then read the sequence of bases three at a time. These triplets (codons) are translated into amino acids to assemble a protein. Each long one-dimensional molecule folds into a 3-D shape under local molecular and atomic chemistry rules. This 3-D shape actually determines much of the functionality of a protein. Rarely, this folding process goes wrong (alternate 3-D configurations occur), causing disorders in the organism such as Alzheimer’s, Parkinson’s disease, and many cancer-related syndromes.

Understanding this protein folding process benefits from massive computing power. Folding@home was established to draw upon the considerable resources of distributed computers worldwide. The ‘client’ is a small piece of software that usually runs in the background on your computer. Participation in this effort by the general public is free, easy to do, and strongly encouraged. 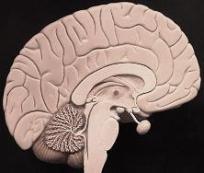 Description
An overview of the current state of neurology, looking at the wealth of new information being gathered via genomics and brain imaging. Anthropology, zoology, and functional genetics are added to the mix. Notes the important yet perplexing inclusion of subjectivity, as suggested by Francis Crick near the end of his life.