First postulated in 1916 by Albert Einstein, gravitational waves are disturbances in the fabric of spacetime. They are caused by, and radiate outward from, a quadrupole (mass distribution) with an accelerating moment. An example in nature of such a system, one that might generate detectable gravitational waves, is a pair of neutron stars in decaying orbit around their center of gravity. The orbital decay results from the loss of energy being radiated away as gravitational waves.

The effect of these passing gravitational waves would be to strain (stretch and squeeze) space. The magnitude of this strain would be in the order of 1 part in 10-20.   This is roughly the ratio of sub-atomic and interplanetary distances.

Several projects are currently trying to directly detect these waves. They use infrared laser interferometry along one or two multi-km vacuum tubes (made effectively even longer by bouncing the light back and forth several times) to measure local disturbances in space with (hopefully) sufficient accuracy. Low sensitivity runs have been completed (data analysis is ongoing), and high sensitivity plans are underway.

Detection of gravitational waves would open up a new avenue of astronomy. Firstly, such quadrupoles would emit gravitational radiation even though they might not emit electromagnetic radiation (eg some black hole configurations). Therefore some objects that were previously unobservable would now be visible. Secondly, unlike electromagnetic radiation, gravitational radiation is not absorbed or scattered significantly by matter between us and the observed object. Thirdly, the amplitude of such waves diminishes only by the inverse of distance, not by the inverse square of distance as with light intensity. Thus, much more remote views would be possible, perhaps all the way back to the big bang. Such detection would also be a strong positive test of the General Theory of Relativity. 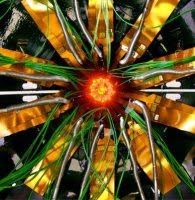 Description
A formal report on the 284 events observed by the ALICE detector at CERN on 23rd November 2009, at injection energy of only 450 GeV. A good LHC primer.

In his current book, “The Greatest Show On Earth”, Richard Dawkins includes a fascinating look at embryology. His intention, indeed his accomplishment, is to show that assembly of complex structure can work on a very short time scale. This is valuable, since the concept of geological time is one of the greatest stumbling blocks to understanding evolution. It’s a non-starter for young-earth (6,000 year) creationists, but it’s also a big problem for everyone else because it’s well beyond staggering – it’s actually incomprehensible.

Dawkins discusses several analogies between natural construction and human activities. One of these is the art of paper folding known as origami. In origami, small steps are taken to achieve intermediate ‘larval’ stages. Emphasis is on the simple folding task at hand, not on the finished design. This is similar to the local rules obeyed by cells during embryonic development, by proteins as they fold into 3-D molecules, and viruses as they ‘self-assemble’. No overall blueprint is ever used, or indeed is ever necessary. Each embryonic cell may have a complete copy of the organism’s DNA, but each cell type will have a slightly different subset of these genes turned on for use. This is how successive generations of cells gradually differentiate.

Thus, local, simple rules govern local changes that ripple, augment, and feed back within the embryo. The origami of each small part participates in the eventual production of the finished, complex organism. This complexity is emergent and is very much unlike top-down architecture. Dawkins doesn’t like the commonly used DNA-blueprint analogy. Emergent complexity is not reversible. One could draw a blueprint from a finished building by taking measurements, but there is no way to reconstruct DNA from a finished organism. (Extraction is not reconstruction.)

To his credit, Dawkins honestly and clearly states that embryology is not evolution. Embryology merely utilizes a pre-existing genetic code while evolution is the process that assembled that code over hundreds of millions of years.

A computer deciphers an ancient language in a couple of hours.