This is a difficult book to describe. It is, for the most part, a compendium of serendipitous discoveries made in science over the centuries. In that sense, it’s a resource. The author writes in multiple layers of technical depth, making the stories compelling and meaningful for everyone from layman to expert. Using the storytelling approach works well. This is definitely not a dry text book. The reader often almost feels the presence of author in the same room. The author was an award-winning chemist, but he was first and foremost a teacher. His generosity began with doctoral and masters candidates under his charge, then university texts, then to the lay public, and ultimately he wrote a children’s book with his daughter.

Serendipity was an important, even revered concept to him. The recent resurgence of this mid-eighteenth century word was noted in that ‘serendipity’ was absent from the 1939 and 1959 editions of a well-known dictionary, but appeared after 1974.

Not much of the book is spent in abstraction or philosophy. It is rather left up to the reader to further explore serendipity. The author states, “I hope that this book will be a stimulus for you…” Perhaps a true understanding of serendipity is serendipitous. 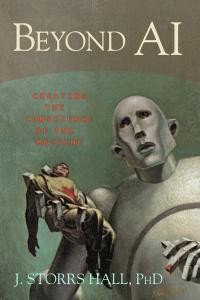 Creating the Conscience of the Machine
by J. Storrs Hall
2007

Written from a perspective shaped by decades of thought in Artificial Intelligence (AI) and molecular nanotechnology (one of the most promising and speculative areas of robotics), this work is an observer’s handbook to the near future of AI.

The author does a good job of being an objective observer. This is not a ‘gee whiz’ futurist pep talk. Nor is it a formal tome which obfuscates AI in a sea of over analyzed mathematics and algorithms. Nor is it a fearful, Luddite rant against technology. The author freely admits to the failures of the traditional rigid rules and goal seeking approaches that were trumpeted by AI researchers in the past. However, it is made abundantly clear that AI is here now and will become ever more pervasive in society. He points out the evolutionary nature of our own intelligence, with the hope that AI can use natural intelligence as a basis and guide. The difficult task of bringing the often tribal camps of psychology, philosophy, and computer science together is tackled with enthusiasm and success.

Who should read this book? Anyone who wants a thoughtful look at the coming convergence of natural and artificial intelligence.

The team name is geopense.QMC and the team id is: 2220